What do you do when the soundboard won’t fit in the gig?  You mix outside!

A few years back I was on tour mixing the Goo Goo Dolls and encountered this peculiar problem.   When we arrive at our gig in Birmingham England, we find that it’s on the third floor of a large building.  I take a preliminary walk around the venue to scope out the FOH mix position and find a small booth in the middle of the room.  With just enough room for the house lighting desk and their digidesign console,  I quickly realize that there is no way my Midas H3000 analog beast is ever going to fit in this booth.  The house audio tech tries to convince me otherwise and begins preparing to remove his desk. 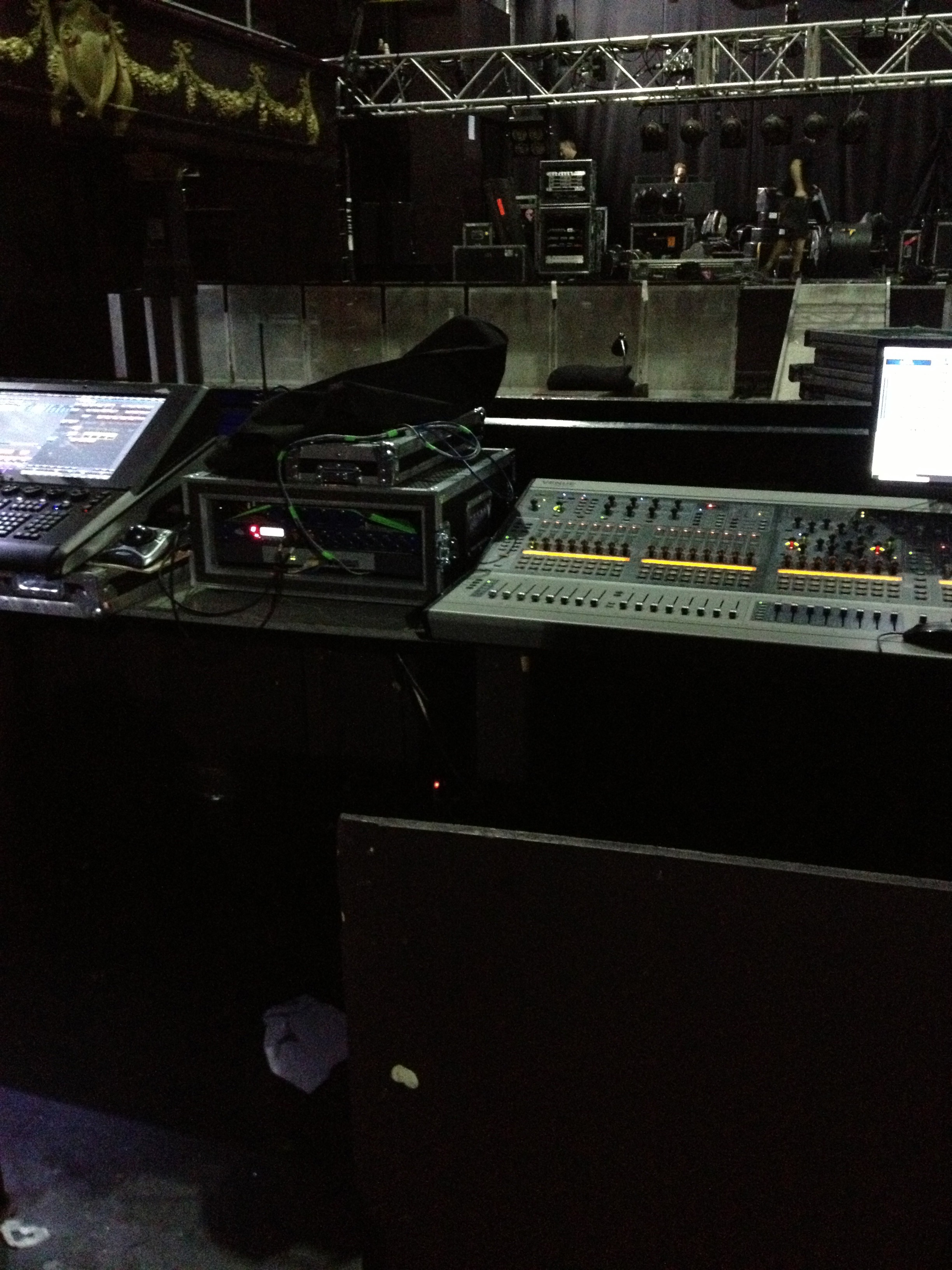 At the same time, load in is beginning at the back of the building and it is a brutal carry straight up a long staircase.  Did I mention this was on the third floor and there is no elevator?  Goo Goo Dolls do not travel light.  There is an entire semi-truck packed full of gear that the stage hands are hefting up the stairs to the stage.  These are not small road cases, some weigh in at several hundred pounds but the local crew is all over it. 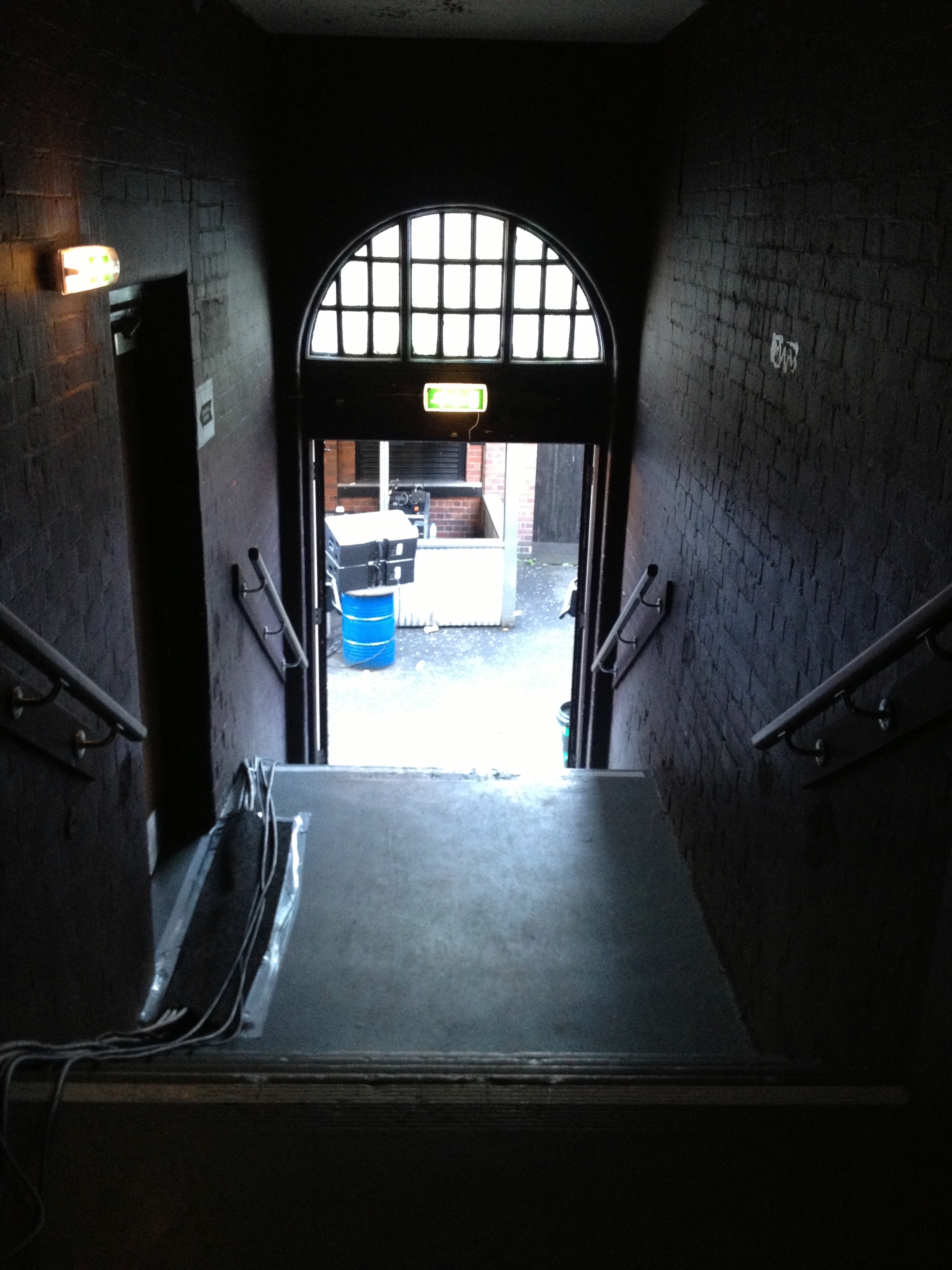 When it comes time for my H3000, it quickly becomes clear that we have a problem.  The console is too tall to be carried in upright.  It won’t clear the low ceiling in the staircase and it’s too wide to be laid flat and carried in that way.  We’re told there is another staircase in the front of the building and the stagehands push the console around to the front lobby.  When I get there, I find about 10 guys gathered around the console trying desperately to get it up the first few stairs and around the corner landing.  This is not good. It’s a struggle, and it is highly likely that someone is going to get hurt so I call out for everyone to stop.

I suggest to my PM that I set up and mix outside of the venue. I’ve had to do it once before with another act and while it’s not my favorite thing to do, it’s possible and right now seems a lot smarter than trying to wrestle this behemoth (weighing in at around 800 lbs), up 3 flights of stairs.

There is a secure enclosed area outside, behind the venue at the bottom of the load in stairs with plenty of space for my H3000.  The stagehands breathe a sigh of relief as we inform them of the new plan.

I set up my desk under a small awning that will offer protection in the event of weather.  We are carrying a few Clair I-3 speakers for front fill and I set two of them up in front of me to use as ‘Texas headphones’ for monitoring my mix.  One thing I have going for me is that Goo Goo Dolls don’t have any amps on stage, so stage volume is minimal and won’t be a factor in my mix. 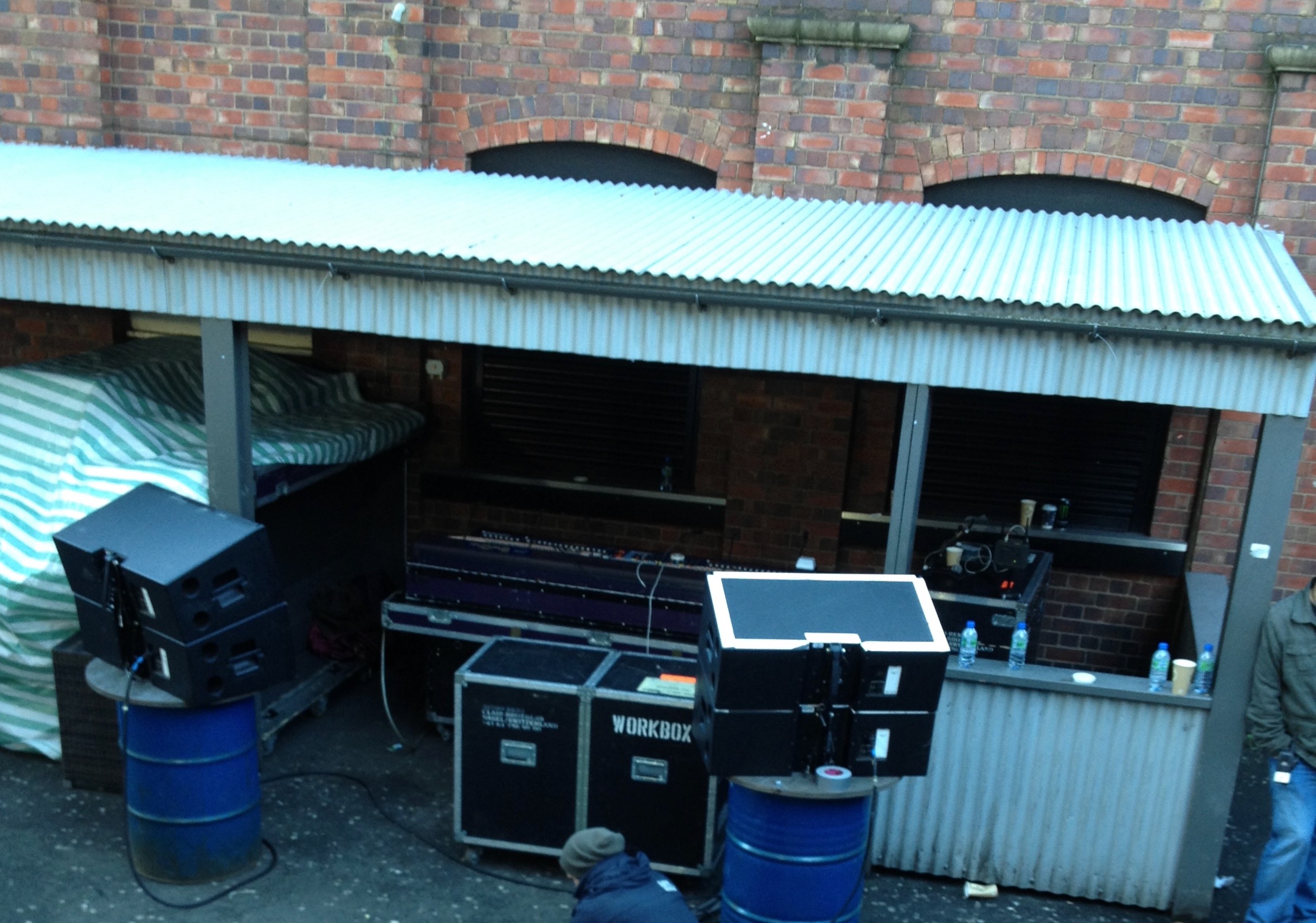 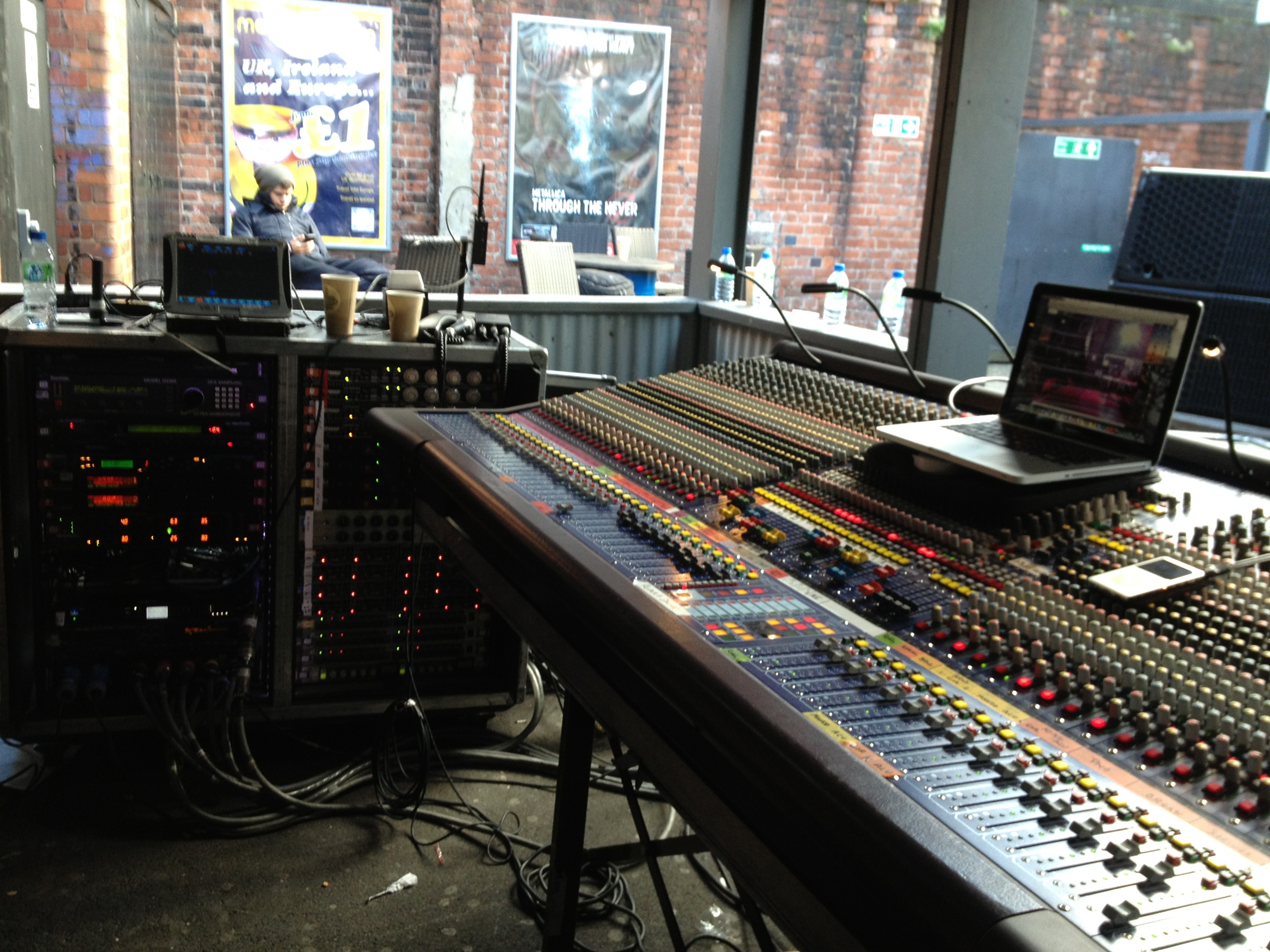 It’s a bit disconcerting when you are mixing a show and can’t see what is happening on stage.  So to deal with that, we set up a laptop on stage connected via a long ethernet cable to mine at the console.  Using the built-in camera and screen mirroring I now have a visual of the stage. 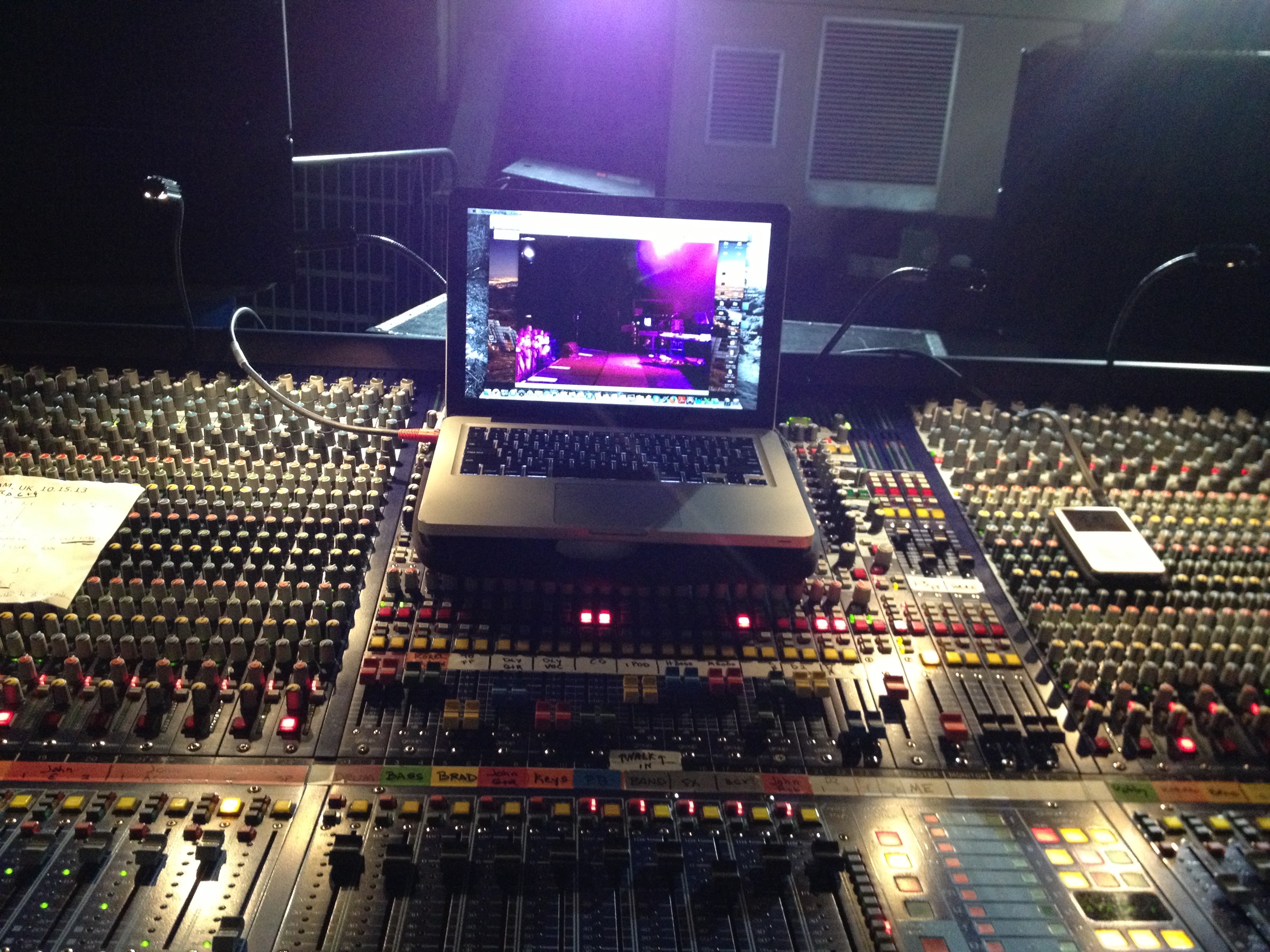 During soundcheck, once I am happy with the mix in my monitors I make a few trips up the stairs to the venue to hear how what I am doing outside is translating inside. The key is to hear what the venue acoustics are doing to the mix so I don’t overcompensate.

My plan for the show is to have my audio tech stationed at FOH on clear-com to me.  He’s very familiar with my mix and can let me know of anything that needs to be adjusted.

Once the show starts he calls me with a few adjustments for keyboards and vocal levels, but other than that everything else is sitting where it should be.  The band pops down to visit while the lead singer does a solo song and they are impressed with my setup.  I’m actually enjoying mixing outside by myself in the fresh air as opposed to being crammed into a tiny little booth surrounded by a lot of loud, noisy, and drunk fans.  I definitely wouldn’t be opposed to doing it again.

The show is successful, everyone is happy and more importantly, no one got hurt!